“The United States of America Ranks Number One In the World….. In Maternal Mortality”

The United States of America is known by many as a medical powerhouse. It is home to some of the best hospitals in the world. Groundbreaking research is done in hospitals and universities across the nation, setting the standard for state of the art care and procedures. It is shocking to many, that the United States has the highest rate of maternal death in the developed world 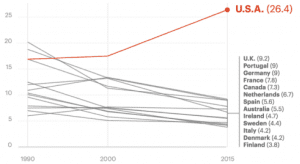 American women die of pregnancy-related complications at an alarming rate. Not only is this rate the highest in the world, but the United States is also the only country where the rate rises yearly (Martin & Montagne, 2017). Other countries see a decrease each year, while the United States loses more than 700 women during pregnancy or after childbirth during the same time period (Addario, 2018). National Geographic Magazine published an article based on maternal mortality statistics provided by the World Health Organization (WHO). The figures below show the rate of death related to race/ethnicity, age, and cause. 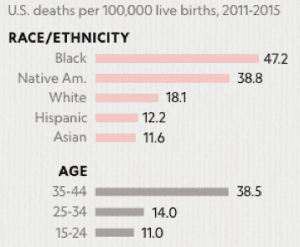 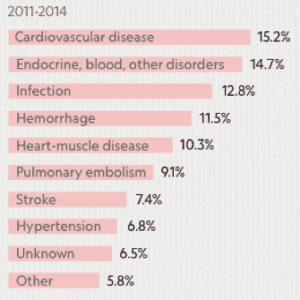 According to a recent Centers for Disease Control and Prevention report, there were 3410 pregnancy related deaths from 2011 to 2015 (AJN, 2019). Sixty percent of these were determined to be preventable deaths (AJN, 2019). There are many variables to consider when discussing the cause of these baffling statistics.

One of the major factors in the high maternal mortality rates is related to the lack of access to healthcare. There is a large, uninsured population that will not seek prenatal care. There is a lack of education provided to young pregnant women regarding the importance of prenatal care while pregnant. In addition, it appears that funding and grants are not prioritizing the goal to decrease maternal mortality. Martin and Montagne (2017) found only six percent of block grants titled “Maternal and Child Health” actually go towards the health of the mothers.

While performing a literature review, very few evidence based research articles existed from the United States. There were many articles published in journals from other countries that provided evidence based research on how to prevent maternal death. One such study out of the United Kingdom found prophylactic antibiotics given as a one-time dose after vaginal births requiring forceps or vacuum extraction, led to decreased rates of postnatal infections (Sofer 2019). This decreased the risk of pain, use of pain medication, and delayed wound healing. Sofer (2019) also noted that the American College of Obstetricians was aware of the positive findings in this study, but refused to implement it in standard practice without stating a valid reason.

This article is Part One in a three part maternal health series. Stay tuned for next week’s blog highlighting what can be done, and what is already being done, to decrease maternal mortality.

Addario, L. (2018, December 13). Can the lives of mothers giving birth be saved? Retrieved from https://www.nationalgeographic.com/culture/2018/12/maternal-mortality-usa-health-motherhood/